The end of April, and Carol's retirement date of July 31st was rushing toward us. Cross Roads Retreat was once again in the position of finding a person to continue the ministry.

The position was placed with an employment agency, to no avail.  Internet searches didn't turn up anyone with the wide assortment of skills needed for the opportunity being offered. We joined the Christian Camping and Conference Association in hopes of finding someone through their Staff Recruiting Center, but once again, lots of folks, but, no one with all the qualifications, or interest in, the multi-faceted job at Cross Roads.
I was quite literally paralyzed.  I didn't even know where to look at that point and had no choice but to just wait upon the Lord.

Interminably long weeks passed before my daughter, Nina, called and told me that she felt like God was telling her to tell me that we needed to pray over the camp.  That through the years thousands of people had passed through the gates of Cross Roads, and many had left their emotional baggage on these grounds.  That baggage needed to be prayed over and tossed out.  We needed to start over - clean.

One Sunday, Nina, my husband Pat, and our friend Erica from our church, Area 3:16; gathered at the camp and we prayed.  We anointed every building, the walls, windows, doors, grounds, we prayed over it all to renew, purify, rededicate and reclaim Cross Roads for Christ. We asked that any evil baggage that might have been lingering here to be laid at the foot of the cross and covered by the blood of Christ.  We welcomed the Holy Spirit back in full force to Cross Roads.

The next morning I received an unsolicited email.  It was from a man who had heard about the opportunity at Cross Roads through a mutual friend.  He did not say who that friend was.  He was currently serving as a Student Minister, had served twelve (12) summers in the camping ministry, and of those he had been full time staff for three (3) years.  He stated he had a heart for camp and retreat ministry. He assisted with website, marketing and community outreach. He represented the camp at conventions, job fairs, recruiting and other public events. He is gifted in the area of relationship building and likes to cook.

As I read this, my excitement grew and I struggled to maintain a professional, cautiously optimistic objectivity. Then I saw his signature.  His name was Jeremy Hellums.  No, I did not know him. Yes, my maiden name is Hellums.  I nearly fell off my chair.  I turned to husband, Pat, who is a statistician and asked him what the odds were...he replied, "there are none."  We sat in awe - speechless wonder - at what God seemed to be doing.

I contacted Jeremy immediately and set up a meeting for that very afternoon with him and his wife, Kari.  While walking the trails I told him that my maiden name was Hellums, and as it turns out, we share the same Great-great-grandfather.

A memory flashed through my mind. A few weeks before all of this came about, the leader of a women's group at the camp came up to me saying she had a word from the Lord for me.  She said, "The Lord told me to tell you that because of your faithfulness many generations of your family will be blessed."

As if I needed any more confirmation, Jeremy's wife, Kari, is a 3rd grade teacher. Their family was already in the process of moving to Kari's hometown of Milano, which is a few miles up the road from Cross Roads.  Her parents still live there, and she hoped to secure a position with the school district.

God had a plan for Cross Roads Retreat generations ago.

On August 1st, the Reverend Jeremy Hellums will answer God's call to become the new Director of Cross Roads Retreat.

All glory to God. 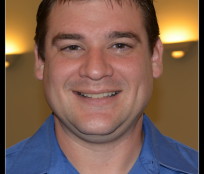 Posted by Hilda Hellums Baker at 11:47 AM