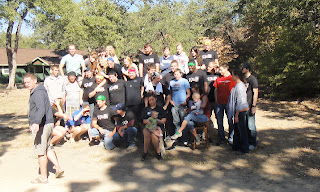 A WOW weekend with a fantastic bunch of Austin Community College Students on a retreat sponsored by several Austin area churches.  The conference room rocked as (2) great bands took turns leading the students in such powerful singing that we could hear it in the dining hall! Teams of students played field games, others played board games and cards, a handful of powerful speakers shared wisdom for living a meaningful, purposeful, fulfilling life, and there was plenty of down time for naps, walks and conversation with new friends.  The only thing missing was the traditional Cross Roads bonfire.  Will the burn ban ever end????
Posted by Hilda Hellums Baker at 10:44 AM No comments:

What a blessed weekend for all concerned!  This was their second year at Cross Roads and it was wonderful seeing old friends and making new ones.  Bondages broken, hearts healed, friendships made, blessings abounded for everyone - including us.  Christ was definitely  "in the building"!!!!! 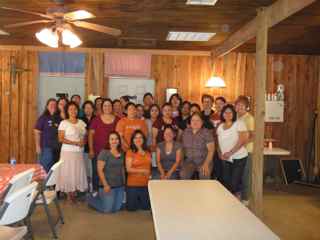 Posted by Hilda Hellums Baker at 10:54 AM No comments:

We loved having this great group of college students from Texas A&M University - and they loved the food as show by this "Thank You Poster".   We thoroughly enjoyed having this energetic, positive and fun bunch. 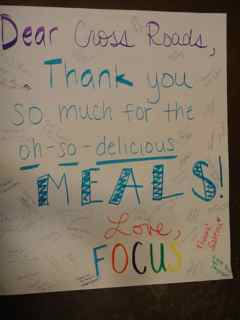 Posted by Hilda Hellums Baker at 10:50 AM No comments:

An amazing weekend with some amazing new friends!  Gateway - Austin brought thirty-four couples to their Marriage Camp at Cross Roads.   They explored dance as a symbol of spiritual unity, communications by working together on the low element team building stations, long walks in the woods, dynamite campfires with lots of s'mores and much, much more. 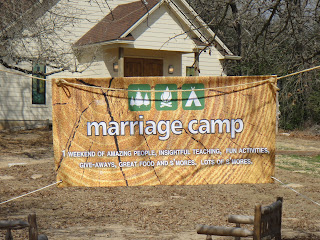 Saturday night the Marriage Camp leaders decorated the dining hall with tons of candles and Rob served a special, romantic Italian dinner with his scrumptious chicken pasta, a spinach, strawberry and roasted pecan salad, cheese garlic bread, AND..... a one of a kind dessert ... (see below) - a chocolate heart shaped plate, a vanilla ice cream heart drizzled with white and dark chocolate and topped with a strawberry. 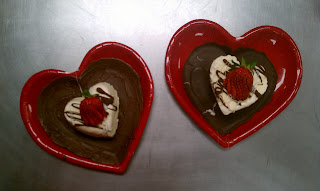 We were blessed to support this wonderful ministry of Gateway Austin and hope to see them again soon!
Posted by Hilda Hellums Baker at 3:15 PM No comments:

In January, we hosted a great bunch of dedicated Christ followers!  The core planning group from Antioch Community Church in College Station came out to spend some uninterrupted time together focusing on their ministry goals for the new year. Their commitment and love for Christ and each other was truly inspiring!
On a Friday afternoon a couple of weeks later, ten men drove up in procession of trucks, including one pulling a 20' long gooseneck trailer loaded with what appeared to be gigantic cement blocks. The advance party sent to set up for a youth retreat scheduled for St. Mary Cathedral of Austin that weekend had arrived. They transformed the front of the Conference Center with what turned out to be styrofoam blocks.  When the giant Greyhound bus arrived, the thirty-five excited youth were greeted by several very special worship spaces guaranteed to wow them!
Then, just last week the camp was once again transformed by the SNOW and ice that hit most of Texas!  A couple of pipes froze, but they were easily thawed with patient use of a hair dryer and lots of hot water.  No damage was done, praise God!   Pat and I  had fun trying to identify all of the critter tracks we found in the snow.  Squirrel, bobcat, coyote?  We still aren't sure what they all are! 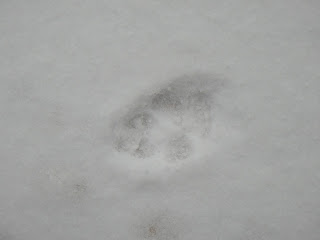 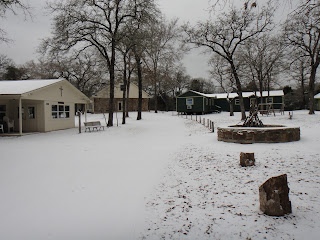 Life at Cross Roads is good and we are looking forward to seeing new and old friends who come to Cross Roads in 2011!
Posted by Hilda Hellums Baker at 12:34 PM No comments: